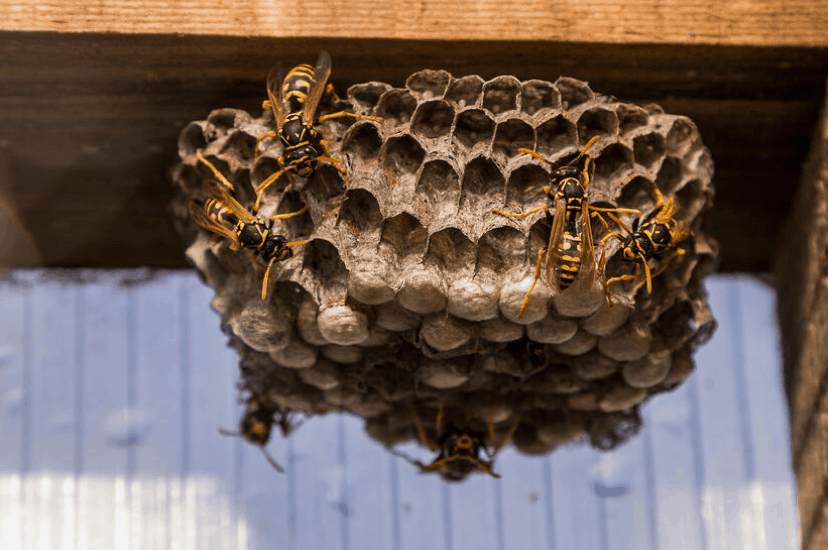 Killing wasps with a homemade wasp killer solution is no easy task considering how dangerous these insects can be. I will tell you in the paragraphs below how to make a wasp killing solution that is inexpensive, effective, and easy to prepare. But first…

It’s important to say you must be extremely careful when trying to kill or remove stinging insects like wasps (even bees) from your home or property. I won’t get into too many details, all I will say is be careful when dealing with wasps. A cautionary warning to you is provided below.

A small percentage of people will have an allergic reaction when stung by a wasp, the sting could cause anaphylactic shock which is life-threatening. If you’re hypersensitive to insects stings going into anaphylactic shock could result in cardiorespiratory arrest followed by death. Enough about the safety risks involved with killing wasps. Are you ready for my best DIY wasp killer solutions?

When it comes to a homemade wasp killer I’m really interested in one thing. How much does the wasp killer cost to prepare?   I’m always looking for a cheap solution that is just as effective as the expensive sprays you buy in the store. If this is your primary concern to you will be pleased with the three options I present below. Each option is effective at getting rid of wasps.

My go-to wasp killer spray is simply liquid dish soap and water. But not any type of dish soap. You need to get the degreasing kind. Dawn is the brand I use and have gotten amazing results when using this product to kill wasps and other insects like ants and roaches.

For the wasp killing spray, you will need 1 bottle of liquid soap, water, and a one (1) gallon garden pump sprayer. You can add as little as an ounce of dish soap for a small wasp nest to as much as half a bottle of soap for larger nests. The tougher the anticipated job the more dish soap to add.

To prepare the wasp spray mixture, add water to the pump sprayer first, then your liquid dish soap. Allow the soap to settle, replace sprayer cover, then pump the sprayer to build spraying pressure. Just be sure to add enough dish soap and water to kill all of the wasps you want to take care of.

Spray this solution directly on wasps at a far away enough distance you do not get stung. The spray works almost instantly. The wasps will immediately fall to the ground and begin to die. After getting sprayed with soapy water the wasp can not breathe and die rapidly. The way it was explained to me is the soap and water clogs up the wasp’s spiracles causing them to suffocate.

The soap and water solution is by far the cheapest and most environmentally friendly way to handle your wasp problems. This soapy water works wonders. Use it to easily drown stinging insects like ants, bees, wasps, and hornets.

Just the other day I overheard someone say “the only good wasp is a dead wasp”. This may be the case if you are worried about being stung or are already on the receiving end of a wasp sting. However, I must add that wasps are beneficial to the environment when they are not putting us in danger.

Peppermint oil and water is another homemade wasp killer that works really well. Wasps hate the smell of peppermint and best of all peppermint will kill the wasp, its larva, and eggs.

Peppermint oil kills and repels wasps. The recipe for the wasp spray is peppermint oil and water. Add one tablespoon of peppermint and four (4) cups of water to a spray bottle. Spray directly on the wasps or the nests. But be careful, and safe as not to get stung. The best time to spray wasps is at night or early in the morning when they are less active and unlikely to attack you.

The third and final option I want to introduce you to is dish soap, vinegar, and water. This option works much like the peppermint oil & water, and the liquid soap in water. Once sprayed with the solution the wasps can’t breathe, they suffocate and die.

I use a 50/50 mixture of vinegar and water. To this, I add about 1/4 of a small bottle of Dawn dish soap. You can get this really cheap at the dollar store. Just spray the wasps and their nest and watch the magic happen. Be careful not to get stung. 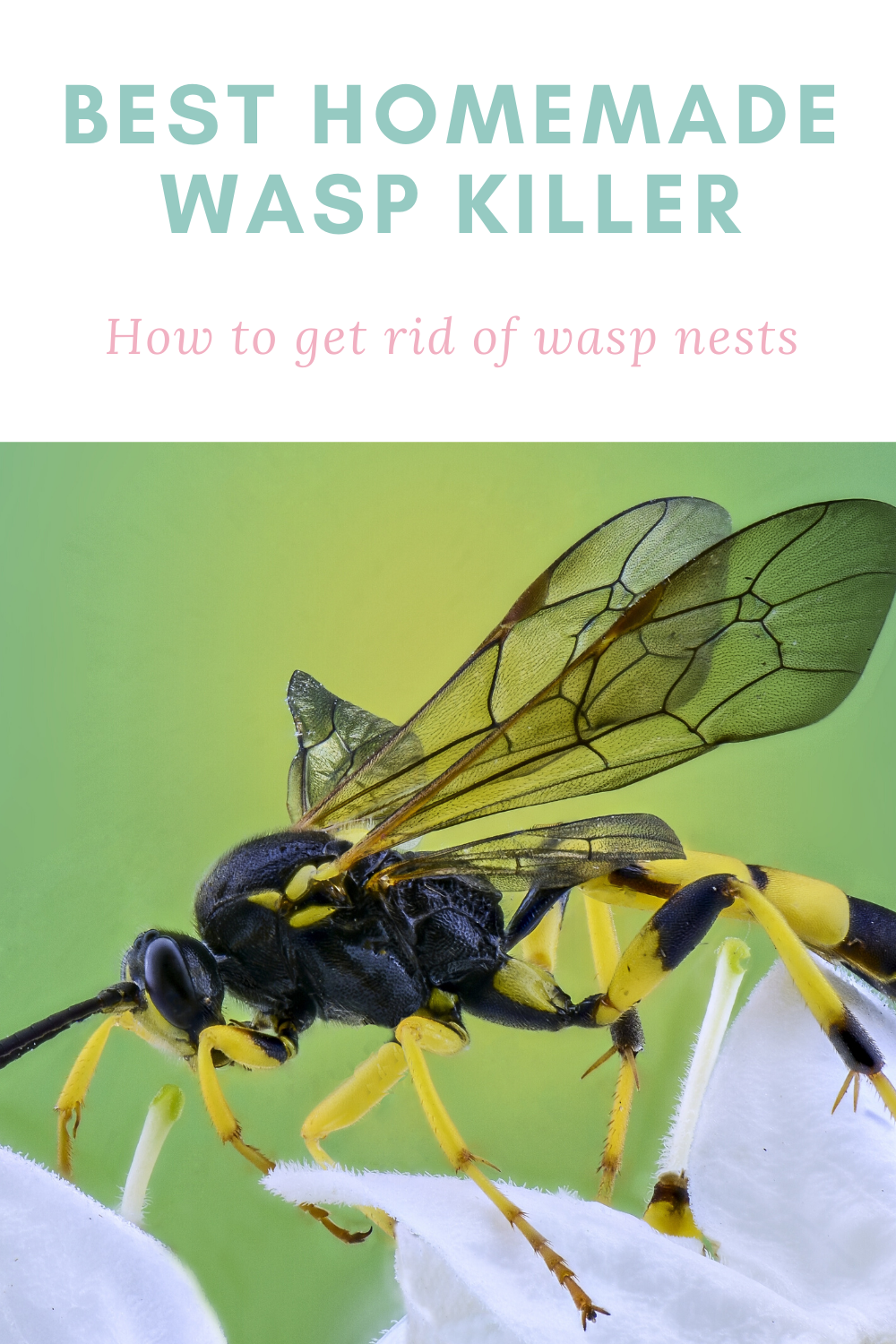 Best Way To Kill Wasp Without Getting Stung

If you are going to kill wasps yourself it’s important that you do not make things up on the fly as you go along.  By doing so you’ll end up on the receiving end of a wasp sting. Through observation, research, and trial & error I have come to the realization that there is a right way and wrong way to go about killing off wasps.

The right way is to wear protective clothing when attempting to kill wasps. If by chance you get overrun by wasps by wearing protective gear you minimize the likelihood of being badly harmed. It is important to consider the time you attempt to kill wasps. You should avoid trying to kill them when they are active. Wait until nighttime or early morning when they are asleep and less active.

How to Make a Wasp Trap

A wise man once said, “the only good wasp is a dead wasp” – do you agree?  Actually the man in the video below said that.  Traps are another effective way to get rid of wasps. You can easily create a DIY wasp trap at home using a two letter plastic bottle.

Watch the video below for instructions on how to prepare the trap and what ingredient to use to attract wasps like crazy.

Are you skeptical about this wasp trap and think it will not work? There is only one way to find out and know for sure. You’ll have to build the wasp trap yourself. Wasps traps should be placed outside. Place the traps where you see the most hornet activity and wasps buzzing around.

You can purchase pre-made wasps traps. However, you can save yourself some money if you are okay with build a trap yourself.

The best advice I can give you is to always be careful when dealing with wasps and other stinging insects. Wear protective clothing and always wait until after dark before trying to kill the wasps.

Insecticide dusts are a long term solution for yellow jackets, paper wasps, hornets and other insects that sting. Use insecticide dusts to prevent wasps and hornets from returning after you treat for them.

I was tired of spending $79 per month ($948 per year) for professional pest control services. Fed up with this out of pocket expense I decided to figure it out myself. I researched and read everything I could find about pest control, learned what works and what doesn't. I created the DIY pest control guide to save you time, money and help you protect the things you love from all types of pests. Since 2016, I have been taking care of my pest control problems without the help of a professional exterminator. I've learned what the pest control companies don't want you to know. Knowledge is power!

Best Mouse Traps – To Kill or Catch and Release Mice

A homemade roach killer is the cheapest way to get rid of your problems. We all… 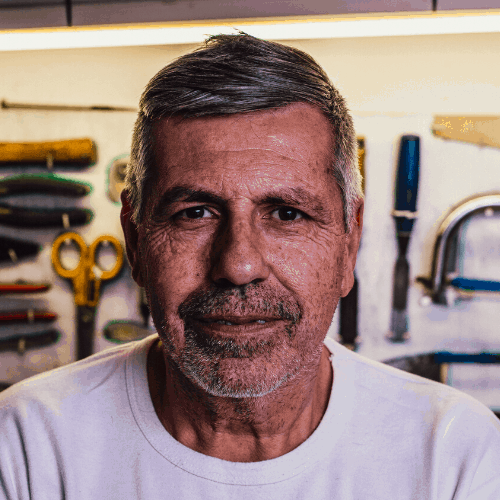 I'm Lynn Edwards, the guy behind the DIY Pest Control Guide. I began researching do-it-yourself pest control techniques in 2016 because I was fed up with paying too much for pest control services. I started this website to help others like you learn how to control and get rid of pests without hiring an exterminator. I'm looking forward to sharing what I know so that you can save time, save money, and protect the things you love from all types of pests.